Since I joined the Frosties on Dath, my warrior has decided he is quite enamored and would like to stay for a while, I have no idea what they get up to when I am not around, but it must be good.  I suspect something to do with drumming and half naked tauren females of a suitable age, he does have such a soft spot for the feather headdress’.

Anyway,  getting off track there.

I have created a tauren druid to keep him company, however given my recent guild drama I may change that to a warlock /DK given they are the classes I have not levelled to max (or have any intention to) and i already have a druid…not sure I want to switch servers with all my toons though – it does get expensive when you have a few inter-dependant toons doesn’t it?  LOL  They really need to have a bulk discounted rate for people to move accounts and not just toons.

I also created a BE rogue to play with. I will see which one takes my fancy more over the next few weeks and see what happens.  My rogue is currently level 10 – two more levels to go and it will be the highest level rogue I have ever had.

You can definitely tell when someone is an addict – when they create a toon and have that many account pets that you get this achieventment :p  I have made her an enchanter and JC…an enchanter would be nice over this side for all my DE’ing needs 🙂 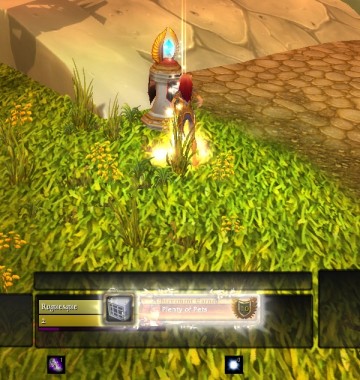 I decided that I love my druid so much, one wasn’t enough, so potentially, by baby druid will be resto and boomy…or maybe bear….but always boomy….ALWAYS!!   Isn’t she just gorgeous 🙂  She is currently sitting at level 8.  I stopped her to create my rogue simply because I may move my druid over to Dath.  Either way I am set to level a second druid- which means I have joined the club of those insane people that have multiple max level toons of the same class.  The majority seem to be Pallies and Druids – but I could never level another pally…that would just be hell I think  – it is for that reason I would never level another mage..they sucked so much during the levelling process in Vanilla, I could not do it again!

Also found a flying pig whilst levelling her…I was quite amused.

2 Replies to “I joined the crazy club!”