Cymre has given us a topic this week that I felt compelled to write about, it has been a while since I have done one and because this is about sentimental items – I just had to jump in!

Once again, I’m hoping this hasn’t been done already, but after the last couple of days of being hacked, I’m putting this out there.

“What are the top three items on your main that you just love for sentimental, fun or silly reasons and would hate to lose? Tell us a story, what makes them so special and as always illustrate with screenshots”

I went a little more then 3, but well, I have been playing the one toon since Vanilla…I think I deserve a little wiggle room :p

I need to explain something first – had I known transmog and void storage would come out, I would not have gotten rid of most of my gear, i loved having it with me, but well i just didn’t have the room.  I have mostly collected tier pieces again now anyway and sometimes increased upon my original collection, however, I would have liked to have kept my heroic ICC gear.  I had about 3 pieces and  was completely entranced by seeing “Heroic” on my gear. I was devasted to get rid of them, but I figured at some point I would just need to get rid of it anyway.  So – IF I had those 3 pieces back they would make up my first thing…but they don’t so I have a spare slot :p

I am sure I am not the only one who has had a similar experience – none of us could foresee the future 🙂 and there are so many collectors out there!

Anyway, here is my list of things I would not be happy about losing. 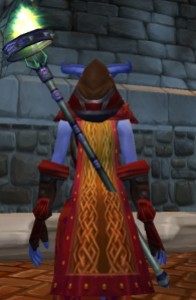 This weapon was one of my first ever epics.  When I started raiding back in the day, we were doing a little bit of everything and with DKP, I was not in line for gear, this was given to me by our class leader because I was always there, doing my thing and never complained about missing out on loot…(that came later :p).  I was new to the game, I was new to raiding and getting epics was a butt tonne harder than it is today – you had to raid to get them – there was none of this VP/JP buying them concept.  I loved that staff – in fact this is the EXACT staff – I have never ever deleted it.  I wanted it to be the exact same pixels from 2005 :p

These robes – I hate now.  With a passion.  I remember running MC almost every Sunday for just under 10 months, each week I would spend 6 hours in there and each week I was in the raid the Arcanist Robes would not drop from Golemagg.  The weeks I got sat out, sure as hell the robes would drop and they would be thrown out because no one else in the raid needed them.  In the end, I never ever saw them drop, not once.  Now that i can run MC on my own, I think I have seen them drop every time I kill Golemagg.  I had about 5 of them in the bank until recently because I was just so annoyed by it. 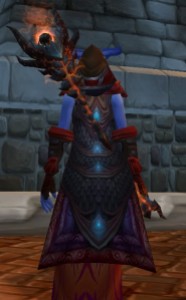 Anyone who is old school will remember, you had to be killing original Onyxia, get her scale, to get a cloak made to survive a boss in BWL.  I loved the connection back then between the raids, I liked how it was sort of progression based like that – I think Onyxia should have dropped like 15 scales at a time though so in 5 runs you could kit out the entire guild – in truth I don’t remember if that was the case anyway :p  Onyxia was one of my favourite fights and I was so amazed that the guild would make me gear –  it made me feel like a raider.  I felt part of the team to receive an item that had to be crafted by someone in the guild with the very special pattern.  This is also the exact cloak I was given in 2005 🙂

My extras which I would be upset about but it wouldn’t kill me :p like the above three likely would!

I know not strictly something people would sell on me if hacked, but I would be devastated if I logged in and they were all gone..I have spent so long with my reputations and farming and collecting, I would be completely destroyed if they were lost.

Although only a recent acquisition, I love it, and I carry it with me at all times now. I love the tagline 🙂

So have a look at some of the other posts this week, we had a massive amount of people get into this one!!  Drop past Blog Azeroth and suggest some topics!!