Yes it is, I have been meaning to update the last few days and honestly, I have just been so focused on getting the few things done that I needed for the following fantastic show of mounts 🙂

Follow me behind the cut for all my pretties!

Darkmoon faire, since my stupid the other day, I had another stupid – I signed up on my druid to run some heroics to get the DMF random drops….after wasting about 50 minutes in total and running 2 heroics with no drops, I stupidly (again) realised that i could buy them on the AH 😀 So including my dailies I could score a couple of mounts this cycle!

So I got my DMF Bear 🙂  I love the bear mounts, I enjoy the way they ride 🙂 ever since the white bear quest in Wrath – you all know which one I mean, I decided I had to have ANY bear.  I got it later – right at the end of Wrath…after doing the daily a fair bit, but not a lot – -unlike some poor souls who are still doing the quest to get it.

I like this bear because when you hit the spacebar, he dances!

For some reason, I thought there was 3 mounts, turns out there is only two…(I hope) so I got my pally to buy the turtle pet as my mage already has the monkey 🙂 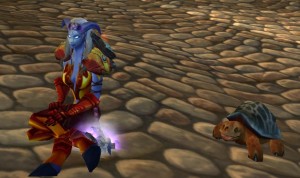 I then forced my druid into buying a the forest strider mount as I managed to get her enough tokens this cycle.  Interesting note about the skin on this one, there used to be a rare in Terrokar Forest (perhaps Cymre can confirm :p) on a floating island that could be tamed by hunters – and that rare was what made me want to start a hunter.  I wanted that bird. Purple and green.  I wanted it!   Now…I have it!!  I can ride the damn thing!  That is so awesome 😀

Then last night, I checked my Tol Barad commendations and discovered I only needed three more for this gorgeous beauty 🙂  I wanted the drake, with a passion when I first saw it. I started my dailies ages ago and then sort of dropped off a little, but I have been doing them diligently every day for weeks now, with another 13 days to go to get the steed.  I will keep plugging away at it.

Sooo pretty 🙂  So mesmerising!  My precious!!!

I guess the reason I am doing so much chasing is because of MoP, since they are making pets and mounts account wide, I am not being exclusive to my mage anymore. I feel dirty about it really, but I want to ensure i can get as many as possible.  If I do change mains in MoP I won’t feel guilty about losing all my mounts and pets.  I have put a lot of time into them, and a lot of time chasing them – as does any collector, so aside from the few which are not going to be account bound, I am happy that I can collect now without fear of losing them all.

I have to start on my argent tourney dailies I think, there are still many mounts out there I need to collect! I think I can solo all of it, but I hate the thought of all that jousting!!  hehe