I really wanted to write on this topic as I have a few things that I enjoy in the game according to this original post :

I’ve written a post on how some small and unexpected things in WoW can delight you and be something you will remember forever. not the big questlines and NPCs blizzard makes sure nobody will miss or every guide makes sure to mention, but the more hidden places or special characters in the game that still offer something unique or entertaining to those that can find them. I would absolutely love to read about more such secret places or NPCs in wow, I have a feeling that there’s quite a few I’ve missed!

i wouldn’t want to restrict the topic to NPCs only, but ask generally: what wow secrets have you discovered on your long journey through the world of warcraft? what unexpected, surprising or delightfully ‘pointless’ things have you chanced upon that add something special to the game for you?

A post or so later though it changed slightly to:

I think it’s important that the topic sets itself apart from general “places i like”-type of posts – but if it’s something like a ‘secret spot’ thats hard to get to in some way or really unknown because its located at the end of the world or something, then I sure think it fits.

So I am not entirely sure any of mine fit into the second category all that well, but in the spirit of the post in total, I have taken some images of the NPC’s and places that I really enjoy in the game.

I have to be honest, most are in BC and I had real trouble thinking of many in Northrend, maybe I just haven’t noticed them this time round…not sure, however due to the image intensity I have added it behind a cut for you 😀  Enjoy.

Caylee is in memorial to someone who passed in Shatt, I love the poem she has for you to read.  I really love how Blizz have done memorials to people in the game.  I like to think it shows some measure of interest in the people who love the game 😀 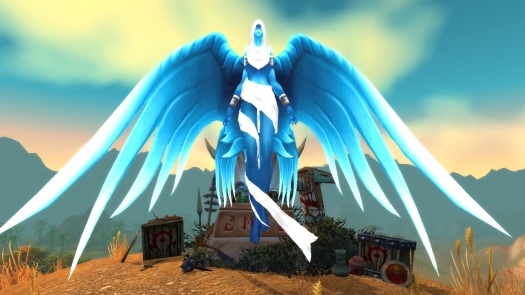 Another memorial to a games developer in the Barrens.

I cannot count the hours I have spent on this ship waiting for raids to form out in Netherstorm.  It is just floating on the rocks at the edge 😀  There is even a skelly on the main deck of the boat leaning up against the rail 😀  I just love it!

I still don’t know why I love this cow so much, but having to escort it to the barn for safety is just pure win.  I love Bessy 😀

My coffee NPC.  Yes I am ashamed to say it, but I always got a cup of coffee when Shatt was the main city.  Every time I logged on – I would hunt him down and buy a supply 😀  I like the idea that my toon is carry around hot cups of coffee and often wonder if they have lids on the cups with the little sippers or if it is just an open container…. 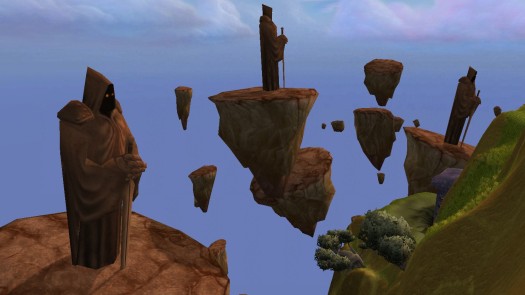 My favourite floating watchers in Nagrand, these guys are simply wonderful with the glowing eyes, I wonder where they are from, what do they mean, what was it part of.

There are a couple of these in Nagrand, where does the water come from to make a continuous fountain?  Has always intrigued me with a mid air waterfall.

And last but not least I have no idea what this person is for – or what quest she gives you – apparently for Hordeside but I don’t remember doing it on my Pally.  All i know is that every time I go to Storm Peaks I try and find the time to go and visit her and say hello 😀  Probably pointlesss but it means something to me 😀

Anyway, they are some of my favourite hang outs and NPC’s in the game.  Odd and unusual things I have seen oin the game and that give me pleasure 😀

I wonder if these are new to anybody, since a fair few people would have skipped a lot of BC content getting to 80….